Will James Martin, SJ Leave The Catholic Church And Become One Of The Founders Of LAUDATO SI CHURCH? 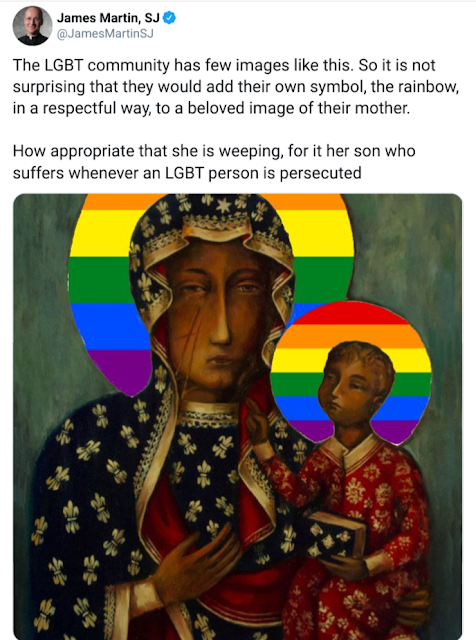 “Evil books will be abundant on earth and the spirits of darkness will spread everywhere a universal slackening of all that concerns the service of God. They will have great power over Nature: there will be churches built to serve these spirits. People will be transported from one place to another by these evil spirits, even priests, for they will not have been guided by the good spirit of the Gospel which is a spirit of humility, charity and zeal for the glory of God. On occasions, the dead and the righteous will be brought back to life. (That is to say that these dead will take on the form of righteous souls which had lived on earth, in order to lead men further astray; these so-called resurrected dead, who will be nothing but the devil in this form, will preach another Gospel contrary to that of the true Christ Jesus, denying the existence of Heaven; that is also to say, the souls of the damned. All these souls will appear as if fixed to their bodies). Our Lady of La Salette 19 Sept. 1846 (Published by Mélanie 1879)
The Laudato Si Church
There will be churches created to serve evil spirits.
Many will leave the Catholic Church to help create these churches that serve evil spirits.
These churches will be environmental churches.
Throughout the history of the Catholic Church  the church has been attacked by heretics. These heretics were Catholic at one time and they left the church to form their own church. These churches took on the name of its creator.
Our Lady of La Salette said that churches will be built to serve evil spirits - this has not happened yet.
What to look for is a man who leaves the Catholic Church to found a new church named after him. It will be an environmental church and it will be in opposition to the Catholic Church.
Will these apostates leave the Catholic Church on their own? Or will these apostates be forced to leave by a strong Pope?
If Archbishop Vigano is elected then he will force the heretics to leave the Catholic Church and they will found their own church - named after pope Francis? or named after nature? or named after demons? I don't know yet.
Will have to wait and see.
It is clear that this new heretical doctrine is the first to be created by these wicked men. They have just not left the Catholic Church as of yet and there is no particular Archheretic to lead them out of the Catholic Church. Maybe this will occur after Pope Francis dies?
Posted by dxv515 dxv515 at February 27, 2021
Email ThisBlogThis!Share to TwitterShare to FacebookShare to Pinterest